You are more likely to hear the song of the cricket at night before you actually see one. Sometimes there will be a cacophony of sound as the male crickets call out to the females in the darkness, and some may find it rather irritating if there is a big group of crickets outside the window. So, could you recognize a cricket if you saw one?

Almost all crickets are either black in color or a very dark brown, which helps them blend into the darkness of night and into the dirt color of the ground. The cricket has six legs, but only four of them are used for walking. The large two legs at the back of the cricket are used for jumping, which is why they are much larger than the other legs.

There are two long antennae, sometimes called feelers, attached to the head of the cricket and these are used for touching and smelling. Sometimes people get confused between crickets and grasshoppers, but the grasshopper is green and the antennae are shorter. However, they are related to each other.

The body of the cricket is broad but looks flattened, and averages between 3/8 and 1 inch in length. The antennae are usually longer than the body, and the majority of cricket species have overlapping wings on top of their back. Some species are wingless and others have really small wings. The cricket has a hearing organ called a tympanum on each front leg.

This particular cricket is also commonly known as a black cricket. They are the really common ones, and tend to be black, brown or sometimes a red color. They tend to grow up to 1 inch in length.

The house cricket is a light yellow-brown color, with a light-colored head which has three dark bands on the top of the head and between the eyes. There are two pairs of wings – one set covers the abdomen and the second pair are a set of long hind wings at the tip of the abdomen. Sometimes these hind wings are shed when the cricket becomes an adult. The hind legs also have spines on them. 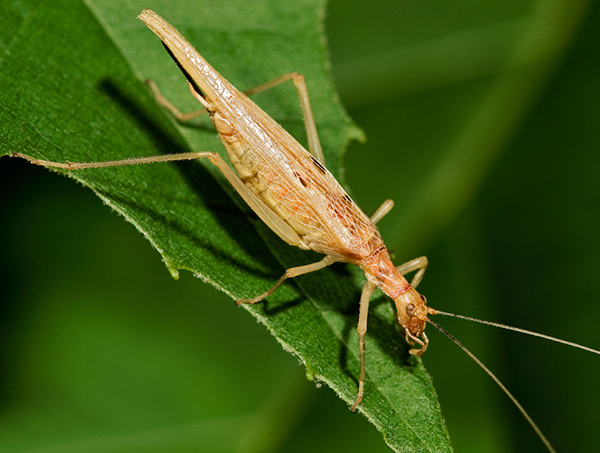 These crickets resemble the grasshopper because they are usually green. They have broad wings that are transparent. There is another type of tree cricket called the Snowy tree cricket, and that one is smaller, and the color ranges from white to pale green.

These are much smaller than most crickets at just ¼ inch long. They are a wingless species of cricket.

A brown cricket, the mole cricket has front legs that look like spades. This is so they can dig in the ground. They have short antennae and grow to about 1 inch in length. There is also a Pigmy mole cricket that is smaller than the Mole cricket.

Do All Crickets Chirp?

You would think that with the amount of noise they can make that all crickets can chirp, but this isn’t true. It is only the male cricket that can make that noise. They do so by running the top of a wing against the ‘teeth’ on the bottom of the other wing, and this makes the chirping sound. The cricket will hold the wings up in the air and open them up to make the sound even louder.

There are four types of cricket chirps – one for calling other crickets, one for courting the female, an aggressive chirp to scare off other males, and a mating call. The calling chirp is quite loud, and is used to repel males but attract females. The courting chirp is much quieter and is only used when there is a female nearby.

Where do Crickets Live? 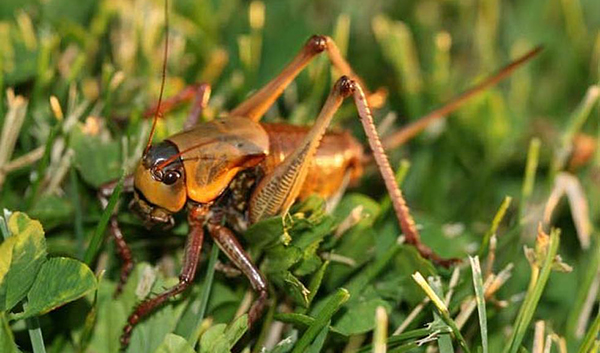 They can live in a variety of habitats, and it often depends on the species of cricket. The most common places to find crickets are around plants and in trees. Field crickets are more commonly found in fields, hence the name, and in lawns, pastures, woods and along the roadsides.

Bush crickets usually dwell in tropical areas, in bushes and near water. The tree cricket lives in trees, shrubs, weeds or high grass. The mole cricket spends most of its time under the ground, so is very rarely seen. Ant-loving crickets live in ant nests, so they have a constant supply of food!

What Do Crickets Eat?

Scavengers and omnivores, crickets feed mainly on flowers, seeds, leaves and barks. There are some species that will eat other insects and snails, and in some rarer cases, lizards and small snakes. The field cricket tends to prefer fruits, vegetables and ornamental flowers and plants. They also eat insects, dead or alive, pupae of butterflies moths and flies, and grasshopper eggs. They have been known to even steal prey from a spider web.

Tree crickets eat aphids, which is a great bonus for your garden if you have an aphid infestation. In captivity, the crickets will eat potatoes and fish food.

How does it Defend Itself?

Crickets are at risk of being dinner for frogs, tortoises, lizards, spiders and salamanders. Despite this, the cricket doesn’t actively defend itself. Instead, they use their back legs to jump away from any potential danger. Some types of cricket rely on camouflage to stay hidden from predators.

If a cricket sense danger nearby, it will go silent and stop all chirping until they know what the intrusion is. If they are captured, they will do their best to wrench themselves free, even risking losing a leg if it means they can escape. They don’t make any noise at all while trying to get away from a predator.

Like many other insects, crickets are attracted to light sources, so they may come inside your home if the lights are on. Once inside, they have a tendency to eat materials and clothes made from wool, silk and cotton. 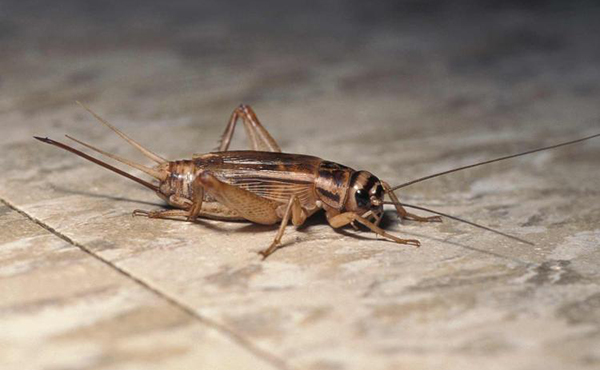 There are a few species of cricket that can and will bite a human if they are fearful of being harmed or killed. These include the house cricket, black field cricket, crazy red cricket and the Jamaican field cricket. The bite can be quite painful, depending on the size of the cricket, but they generally are not strong enough to break the skin.

If a large cricket bites you, it may do so multiple times which increases the severity of the pain. The good news is that crickets don’t transmit any fatal diseases to people, but they can cause some less-serious health issues.

The house cricket is known to carry salmonella and E. coli bacteria as well as parasites, so being bitten by this cricket could result in a bacterial infection. You can also get the infection from coming into contact with the cricket’s feces.

There are just a few symptoms of cricket bites, none of which are too alarming. The main symptoms include:

Of course if you have picked up a bacterial infection from the cricket, the most common symptoms to be wary of are a high fever, sweating and a general feeling of unwellness.

If you are unfortunate enough to be bitten by a cricket, the very first thing you should do is wash the area thoroughly with antibacterial soap and warm water. Then apply an anti-bacterial ointment to the bite. This should normally take care of any bite issues, but if the rash gets worse, you may need a course of antibiotics, so you should see your medical practitioner.

Should We Worry About Crickets?

Overall, crickets are completely harmless if you leave them alone. If you want to try and catch them, you are more likely to be at risk of a nasty bite or an infection. But, if you leave them be, they won’t bother you at all. The scariest thing about crickets is probably the way they look rather than their ability to cause you harm.

Crickets can be useful in the garden for getting rid of dead leaves and plant matter, and feeding on aphids and other harmful insects. If you want to get rid of your crickets, you need to weigh up whether they are damaging your garden or protecting it.